Will They Ever Make a Plane Bigger than the An-225?

There is no doubt that commercial passenger airplanes are big – the Boeing 747-8 and the Airbus A380 dominate in this category. Each has the ability to transport more than 500 passengers on the longest regularly scheduled commercial flights in the world, however, the flying giant Antonov An-225 Mriya (dream) tops these both for its achievement in size. A plane this big is enough to incite wonder and amazement for all who are lucky enough to watch it float through the air.

It is the largest airplane currently in operation anywhere in the world. It stands at 18.1m high (about the height of a 6 storey building) and 84m long. It has a wingspan of 88.4m and a maximum take-off weight of 640 tonnes. Its empty weight is 285 tonnes and can haul cargo that has the weight equivalent to ten battle tanks.

Only one An-225 has ever been fully built. Its design and construction were done during 1984-1988 by the Soviet Union in order to transport the Buran spaceplane from its landing sites in the USSR back to its launch site at Baikonur Cosmodrome in Kazakhstan. It performed 14 of these flights until the Buran shuttle program was canceled in 1993.

Since 2001, it has been in use around the world for commercial cargo transportation. After the cancellation of the Buran shuttle program, the An-225 began an overhaul for commercialization in 2000. It was reintroduced in 2001 under the management of Antonov Airlines. Since then, it has flown cargo all around the world and has played a big part in transporting emergency supplies for disaster relief operations.

It holds about 240 world records. These include: 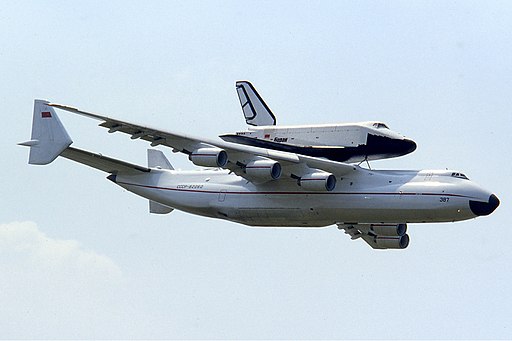 Production of a second An-225 was started in 1987 but, due to a lack of funds, was canceled in 1994 being only partially completed. It is currently stored in a hangar in Kiev, Ukraine. On August 30, 2016, the Aerospace Industry Corporation of China (AICC) agreed to the completion of the second airframe, promising to deliver the completed plane to China in 2017. This deal serves as the beginning of China’s solution to curb their ever-increasing strategic airlift demands. A regular production of 10-15 An-225 aircraft is a possibility given the strong economy in China. It is also possible the AICC could be looking to develop their own version of a super-heavy cargo plane.

The Antonov An-225 is in an aircraft class of its own. It shows its superiority every time it takes off on a mission to haul some of the world’s heaviest and largest cargo. Although the size of the An-225 puts it in a flying league of its own, the certification process used by the Interstate Aviation Committee (the official civil aviation authority in Russia) required to deem this aircraft flight-worthy is “sufficiently similar in structure and performance”[1] to the certification process of the Federal Aviation Administration (FAA) which Aversan uses to certify its hardware and software. Learn more about the design and certification process here.